There are three parallel stories flowing past me via Tweetdeck and on Friendfeed right now: One story is about Facebook and their hubristic attempt to declare everyone’s personal information public. Another story is a librarian debating whether it’s OK to write a blog post containing tweets from library users with public accounts. Third is this story about the poor student who had a harsh appraisal of her posted to the internet by her pseudonymous advisor. This blog, named Synthesis, exists precisely to synthesize meaning from these seemingly unconnected events. END_OF_DOCUMENT_TOKEN_TO_BE_REPLACED

If I published in or reviewed for PLoS, I’d be pissed off too.

Cameron Neylon responds to the allegations that PLoS is a pay-to-play vanity press:

That an author pays model has the potential to create a conflict of interest is clear. That is why, within reputable publishers, structures are put in place to reduce that risk as far as is possible, divorcing the financial side from editorial decision making, creating Chinese walls between editorial and financial staff within the publisher.  The suggestion that my editorial decisions are influenced by the fact the authors will pay is, to be frank, offensive, calling into serious question my professional integrity and that of the other AEs. It is also a slightly strange suggestion. I have no financial stake in PLoS. If it were to go under tomorrow it would make no difference to my take home pay and no difference to my finances. I would be disappointed, but not poorer.cameronneylon.net, Science in the Open » Blog Archive » In defence of author-pays business models, Apr 2010

You should read the whole thing.

An anonymous source has informed me that the ASCB has banned “replication of data” by visitors, but has presented Twitter as the poster child of conference data leaks. No word on whether ASCB attendees will be subjected to memory scans upon exit. The sign says: 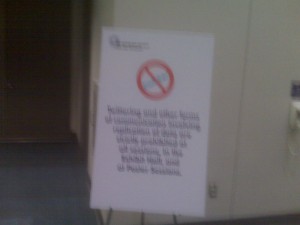 Twittering and other forms of communication involving replication of data are strictly prohibited at all sessions, in the exhibit hall, and all poster sessions.

An open letter to the medical community.

I’ve been following the DTC genomics and personalized medicine discussions for years now. I’ve learned that there are diverse and well-reasoned arguments by capable spokepeople proposing many possible futures for the doctor-patient relationship. Discussions during this weekend’s BIL:PIL conference and a recent exchange with Dr. Steven Murphy, with whom I’ve disagreed, occasionally vigorously, for years prompted me to put down my thoughts here. Actual meeting notes will follow in a separate post.

I believe, as does pretty much everyone, that medicine is on the cusp of great changes and that personalized medicine holds great promise. I believe that an informed patient is an empowered patient, and ultimately a healthier one. Every good doctor should want this, and every below-average doctor should pray this day never comes.

I’m officially looking for another job.

Where I came from

Over a year ago I made one of the biggest decisions of my life. I packed up all my worldly belongings and moved to San Diego to begin working full-time for a small biotech startup. This was a unique opportunity for me because it was a friend who was starting the company, he and I had been speaking over the past couple years about his ideas for a company, they had had me out several years ago during their prototype phase to show me the technology and get a biologists perspective on what a successful product should look like, and I had been doing some consulting projects for them over the past year. At the time, they displayed little understanding of basic molecular biology concepts, but I didn’t think that would be a big deal because they were just starting up and not coming from a biology background, rather an electrical engineering one. I’ve now made another big decision, and that’s to end my relationship with them and move on. Below, I discuss what I’ve learned and what I might like to do in the future. END_OF_DOCUMENT_TOKEN_TO_BE_REPLACED

The effect (on one person) of pulling tweets into friendfeed.

With the announcement of Facebook’s acquisition of Friendfeed, I decided to start pulling my tweets into friendfeed. The results were interesting. END_OF_DOCUMENT_TOKEN_TO_BE_REPLACED