The effect (on one person) of pulling tweets into friendfeed.

With the announcement of Facebook’s acquisition of Friendfeed, I decided to start pulling my tweets into friendfeed. The results were interesting.

Why did I do this?

I did this because Facebook bought Friendfeed and everyone I read expected this to pretty much mean the end of Friendfeed as we knew it (and I still think it does), so I wanted to advertise the new focus of my social network activity. I had not done this in the past because I found that it made for a very noisy friendfeed and because I rather expected an @reply to a tweet than a comment on it in friendfeed. I expected this to shift a small number of subscribers from friendfeed to twitter followers, however what I actually found was a very weak effect on both sites.

How did I analyze the effects?

First, I used Twittercounter to get a graph of my twitter follower history and I compared it with the follower history of Neil Saunders, another person in my network with a similar number of followers and approximate level of activity. Referencing my follower trends to a related person helps indicate which are twitter-wide events (or twittercounter hiccups) and which are specific to me.
Next, I got my Friendfeed subscriber number trends via Feedburner. Because I hadn’t written a post in a few months, my feedburner stats reflected almost exclusively my friendfeed subscriber trends. I couldn’t get a reference graph for FF subscriber numbers like I did for twitter followers, but if you’d like to take my data and overlay it with yours you can download the .csv.

The friendfeed-facebook announcement was made on August 10th, and I added twitter as a service on that day. 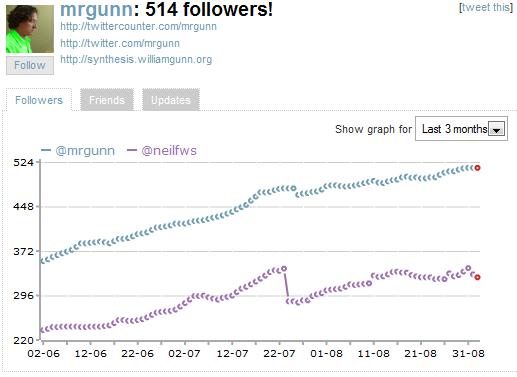 You can see that there’s a very slight dip on that day, but there was essentially no change. You can also see that both Neil and I are fairly aggressive about weeding out our spam followers, looking back at the Great Twitter Spam Attack of July. 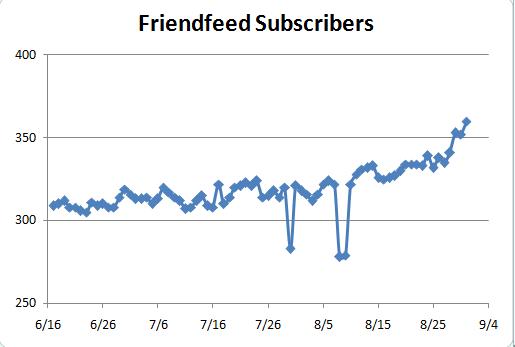 The friendfeed subscriber trend remained basically unchanged as well. There’s a sizeable dip a couple days after the 11th, long enough for people to get annoyed and unsubscribe, but the numbers bounced right back with a couple days. I don’t know what the two previous spikes were, but in my experience with Feedburner it’s not unusual for your subscriber numbers to be abnormally low for a day or two and then recover.

What does this all mean?

Not a whole heck of a lot, I don’t think. While it confirms my hypothesis that it would annoy some of my friendfeed subscribers and drive them away, the effect, purely based on numbers, wasn’t very large. Checking my email for new subscriber emails since the 11th confirms that the recovery was from new subscriptions on friendfeed (from good people, too!) not feedburner weirdness or a sudden unexplained bump in RSS subscribers. The blip on the very end of the friendfeed graph could have come from some recent messing around I’ve done with my google profile, or it could be from some emailed-but-not-yet-blogged-about stuff that I’ve been doing. I’ve now removed twitter as a service again.